Posted on September 28, 2015 by Administrator

We’re each keenly looking forward to play again at CCRMA, the South Bay’s floating city of computer music, whose brilliant composers and music technologists are always on the leading edge of projects such as telematic performance, reproducing the hyper-prolonged delay of the Hagia Sophia to perform Byzantine music designed for a space a half-planet away, mustering massive laptop-orchestras, gamifying music, 3D-printing mutated daxophonic attachments, and sonifying tomatoes.

Two of the Bay Area’s most daring improvising musicians team up for a percussion++ evening of rhythmic and meta-rhythmic electro-acoustic improvs.

William Winant is one of the foremost percussionists of the era, equally at-home and sought after in both the wildest of avant-garde jazz and the most demanding of contemporary classical contexts. Joe Lasqo bridges the worlds of electronics and acoustic music, using both laptop and piano, improv and AI techniques, to create a meta-percussive moiré.

Both William Winant and Joe Lasqo trained as South Indian drummers, William Winant with Trichy Sankaran (திருச்சி சங்கரன்), and Joe Lasqo in India with V. Nagabhushanachar (ವೀ. ನಾಗಭೂಷಣಚಾರ್), so the result is a compelling interplay of cutting-edge modernism and the world’s most virtuosic rhythmic tradition.

William Winant and Joe Lasqo use and extend these South Indian rhythmic concepts (and a lot more…) in the context of today’s electronic and avant-garde music where they become part of a varied and eclectic toolkit for radical sonic exploration.

Enriched by the avant experience and virtuosity that have made William Winant’s recordings of Cage and other modernist percussion composers win critical acclaim, tāla becomes meta-tāla in his hands.

Joe Lasqo remaps the rhythms into the piano used as percussion instrument, adding from the laptop the kind of abstract, post-modernist, electronic realization of the Indian rhythm component pioneered by Walter Durand on Other Minds’ ground-breaking recording of Cage’s Song Books, Vol 1: Solo For Voice #58: 18 Microtonal Rāgas. 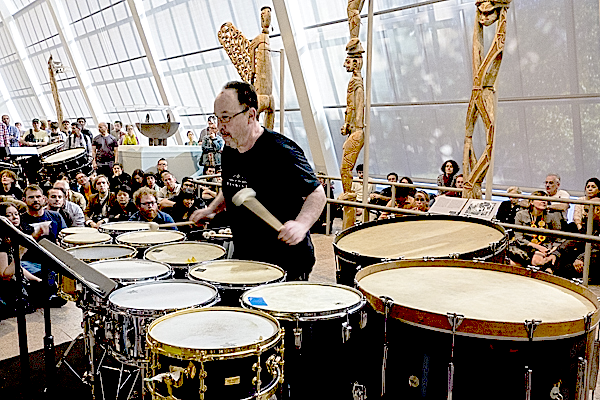 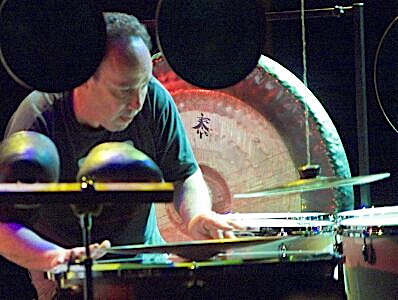 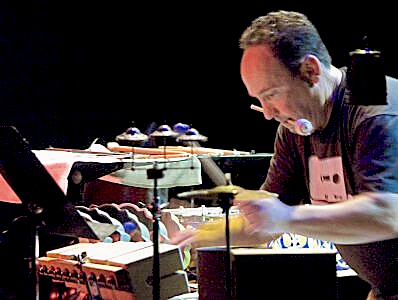 He’s principal percussionist with the San Francisco Contemporary Music Players, he’s been closely associated with NYC composer John Zorn, & has made numerous recordings, and performed in many projects throughout the world, with the composer. Starting in 1995 he’s been the percussionist with the avant-rock band Mr. Bungle, has made two recordings (Disco Volante and California on Warner Brothers), and has toured throughout the world with this group. For many years he had worked with composer Lou Harrison, recording and premiering many of his works, and in March of 1997 he participated in the world premiere of Lou Harrison’s quintet Rhymes With Silver featuring cellist Yo-Yo Ma (馬友友) and the Mark Morris Dance Group, and has toured the piece throughout the United States and Great Britain. In the fall of 2011, he joined Mike Patton’s Italian pop music project Mondo Cane which features a 12 piece band + string orchestra, and have recently completed tours of South America and Australia.

In the fall of 2003, celebrating the 50th anniversary of the Merce Cunningham Dance Company, William Winant, along with composers Takehisa Kosugi (小杉武久) and Christian Wolff, created music for a series of eight special “Events” staged by Merce Cunningham and Dancers at London’s Turbine Hall at the Tate Modern. Since then he has continued to tour throughout Europe and the United States with the company. 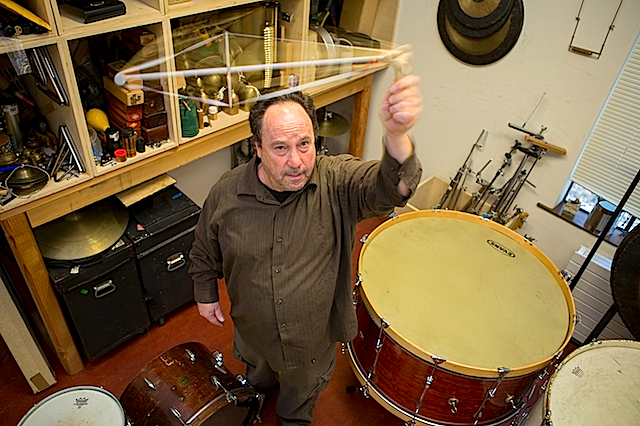 He’s made over 200 recordings, covering a wide variety of genres, including music by Earle Brown, John Cage, Morton Feldman, Christian Wolff, John Zorn, Butch Morris, James Newton, Frank Gratkowski, Pauline Oliveros, Luc Ferrari, Karlheinz Stockhausen, Danny Elfman (Batman Returns), Siouxse & the Banshees, Secret Chiefs 3, ICP, Han Bennik, The Ex, White Out with Jim O’Rourke, Lou Reed, Thurston Moore, and Mike Patton. His recording of Lou Harrison’s La Koro Sutro was the New York Times Critic’s Choice for best contemporary recording of 1988. In 1999 he produced a recording of music by 20th-century avant-garde composers with the influential rock band Sonic Youth: Goodbye 20th-Century (SYR4), which was hailed by both The LA Times and Village Voice as one of the best compendiums of this type of music ever recorded. More recently his recording with cellist Joan Jeanrenaud of her CD Strange Toys was nominated for a grammy in 2009. Also he along with guitarists Henry Kaiser and David Lindley, created special music for Werner Herzog’s 2009 Oscar nominated documentary Encounters At The End Of The World.

Pianist / laptopist Joe Lasqo studied classical music in India; computer/electronic music at MIT, Columbia, Berkeley/CNMAT; has been a long-time performing modern & avant jazz musician; & has lived, played and listened in several Asian and European countries (now in San Francisco). He’s keen on the application of artificial intelligence techniques to improvisation and the meeting of traditional Asian musics with the 21st century. 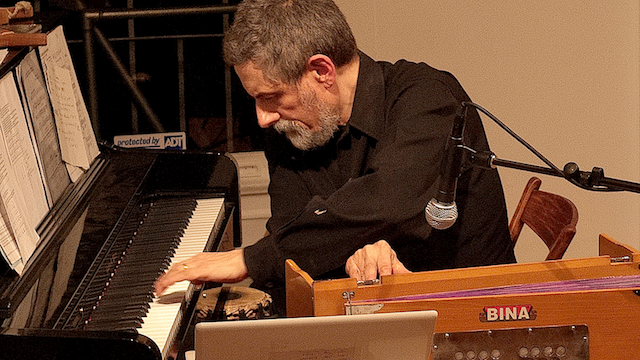 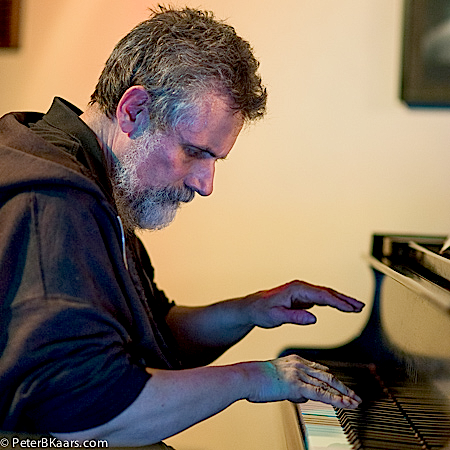 What is the tāla of one hand clapping? Join us at CCRMA to find out…