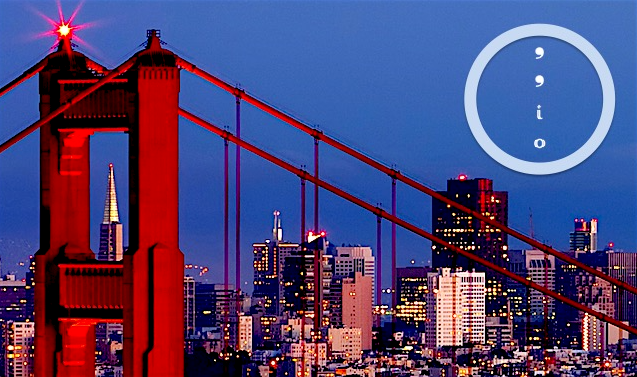 I keenly look forward to another show at The Second Act, the wonderful performing arts space and restaurant zone that Jack & Betsy Rix, members of the original Red Vic collective, have now created in the Red Vic’s former site. 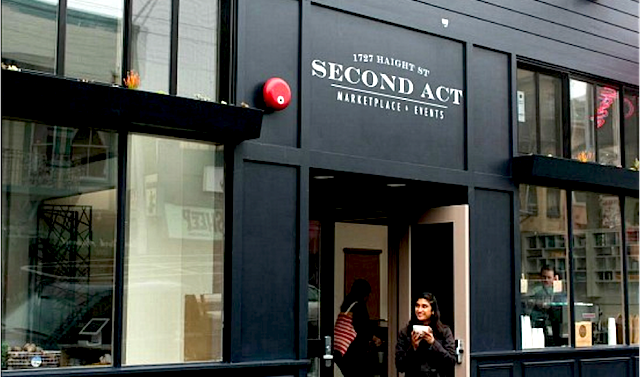 The Second Act, the next generation of the Haight’s Red Vic

The throbbing avant energy unleashed at The Second Act has not only attracted a large and actively engaged audience, but has recently erupted into the visual dimension as well, starting a new film + music series last August, including Ben Tinker’s film + music project That Hideous Strength and my own ensemble Fushigi Kenkyūkai (不思議研究会). 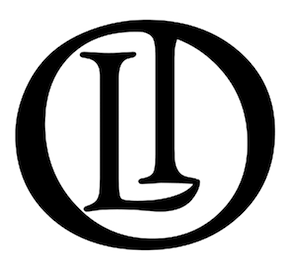 While playing with the London Improvisers Orchestra (LIO) on a recent UK tour, I was very impressed with their well-developed language for conducting large-scale improvisations — fun, easy to use, expressive, and musically powerful.

Also impressive was the body of shared practice and community this has fostered in London — based on a common language for silently communicating musical intent. The musical results were stunning.

I thought, why not have a new Bay Area outpost of LIO’s hand-signal language for improv — a Golden Gate Improvisers Orchestra (or GGIO) — and start a similar series here?

The Second Act have kindly agreed to host us, and we present our BIG BANG show! 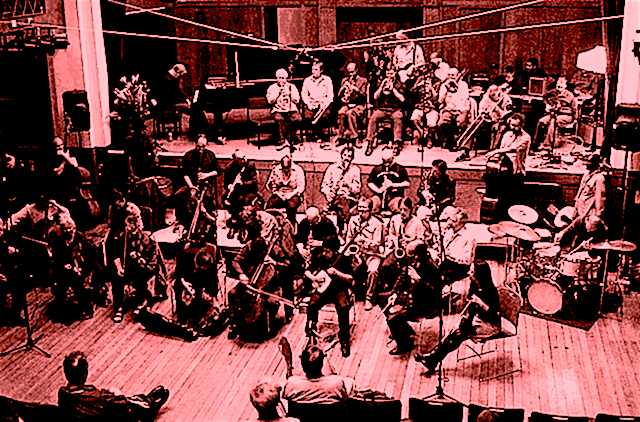 The London Improvisers Orchestra in action

The London Improvisers Orchestra was formed by Steve Beresford, Evan Parker, & Ian Smith after their tour with Butch Morris in 1997. 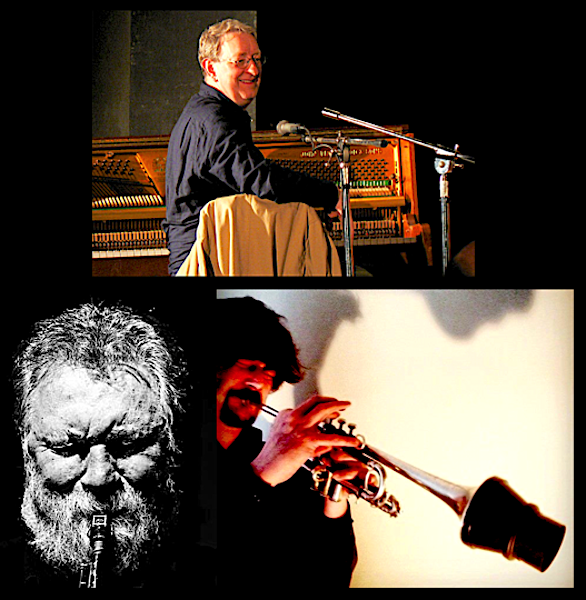 They were shortly joined by two more co-conspirators, Caroline Kraabel & Pat Thomas, who also wanted to continue this approach to creative music-making, and they put together an orchestra of improvisers that gathered regularly, trying to evolve and improve listening and playing skills for both conducted and sustained, completely free improvisation by a really large group. 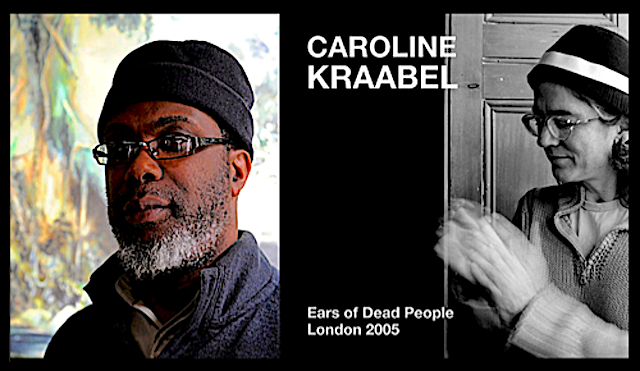 Since then, LIO have continued playing concerts monthly for almost 30 years, using, refining, & extending Morris’ conduction hand-signal language for large groups of improvisers, have issued many albums, and have been the highlight of the long-running London Freedom of the City festivals. Concerts include at least one completely free improv in addition to conductions.

The LIO improv conduction language can express the most spontaneous and unplanned of musical gestures via an orchestra of many players, — or, paradoxically, can even be used to create “composed improv” pieces for large ensembles, for example, Steve Beresford’s great 3-movement piano improv Concerto For Soft-Loud Key-Box (a play on Beethoven’s description of the pianoforte as a „Schwach-stark-tasten-kasten“).

The results of either approach are fluidly pyrotechnic.

A list of the many brilliant improvising musicians who have played with LIO over the years can be found: here.

GGIO’s Big Bang appropriately features a rare encounter of 3 master percussionists (as well as another power trio of saxists) and a crew of the Bay Area’s most adventurous improvisers:

It has been my great honor and pleasure to work with Aaron’s unique graphic scores in his inimitable Electro-Magnetic Trans-Personal Orchestra. 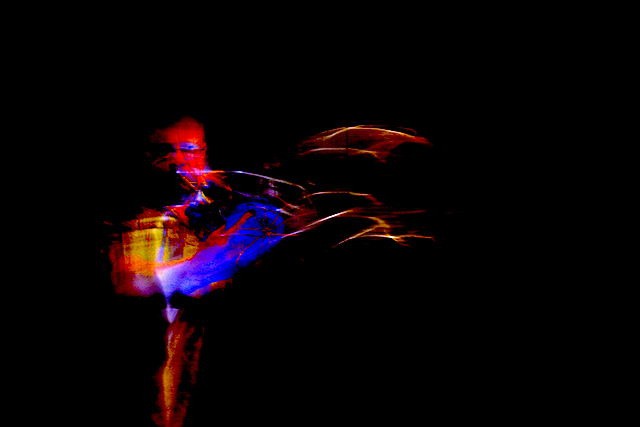 A member of too many avant-music groups to list in this space, Tom has been a key weirdness generator in my film sonification group, Fushigi Kenkyūkai (不思議研究会). 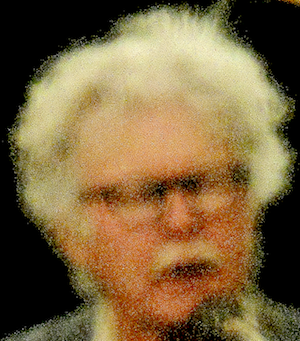 Ron Heglin is a trombonist, vocalist (and sometimes…  tuba player!), working with extended technique on the trombone and with spoken and sung imaginary languages as a vocalist. His vocal music has been influenced by his study of North Indian vocal music. He is a founding member of the groups Music For All Occasions, Rotodoti, and Brassiosaurus, and has performed with the Merce Cunningham Dance Company, Wadada Leo Smith, Henry Brant, Logos Duo, Tim Perkis, John Bischoff,Tom Djll, and Toyoji Tomita (富田豊治).

Pianist / laptopist Joe Lasqo studied classical music in India; computer/electronic music at MIT, Columbia, Berkeley/CNMAT; has been a long-time performing modern & avant jazz musician; & has lived, played and listened in several Asian and European countries (now in San Francisco). He’s keen on the application of artificial intelligence techniques to improvisation and the meeting of traditional Asian musics with the 21st century. 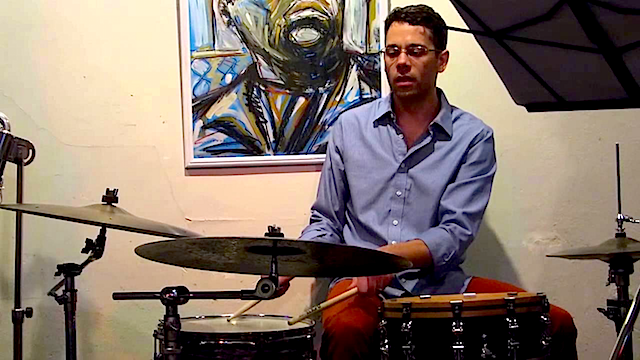 The music of composer, drummer, and percussionist Jason Levis lives in the rich spaces where styles intersect and musical languages merge. Active in jazz, contemporary improvisation, and modern classical composition, his wide-ranging creative efforts are fueled by his innate sense of timbre, sonic space, rhythmic force, and his insatiable interest in discovery. Over the years his passion and curiosity have led him to search out the intersections of musical paths less traveled (spectralist jazz, anyone?), and the resulting unique perspective is reflected in his music. Jason holds a Ph.D. in composition from UC Berkeley. Recently returned from Berlin, he currently teaches at the California Jazz Conservatory. 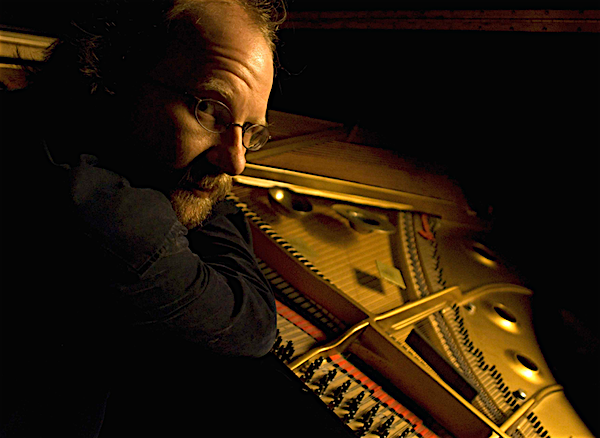 Scott is a pioneer in expanding the timbral possibilities of the piano, and using pianists such as Denman Maroney as a starting point, has forged a signature style using the inside and outside of the piano, plucking strings, using metal implements and other quick preparations, in combination to playing the piano normally.

He has also developed a flexible, expressive voice with electronics using Max/MSP which is as effective and original as his kaleidoscopic piano textures. 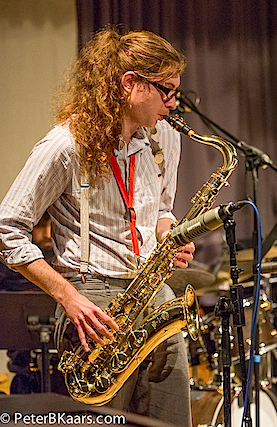 A highly sought-after contributor to many of the Bay Area’s improvising ensembles, Oakland-based saxophonist and composer/improviser Joshua Marshall‘s amazing technique shatters the mirror of reality into a geometry of cracked multi-phonics, exotic trills, and unique timbre tremolos. 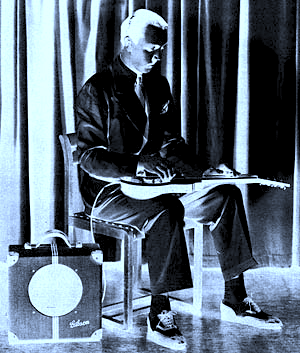 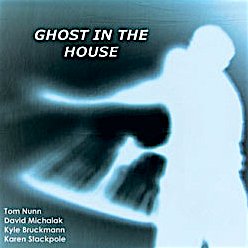 David Michalak joins other spooks in Ghost in the House

David has added his unique ectoplasmic exuberance to many of the Bay Area’s avant ensembles (most recently the wonderful Ghost In The House), as well as some very unusual duos, like T.D. Skatchit (w Tom Nunn) and Dr. Bob (w Bob Marsh), playing a variety of invented instruments, lap steel guitar, and FX. 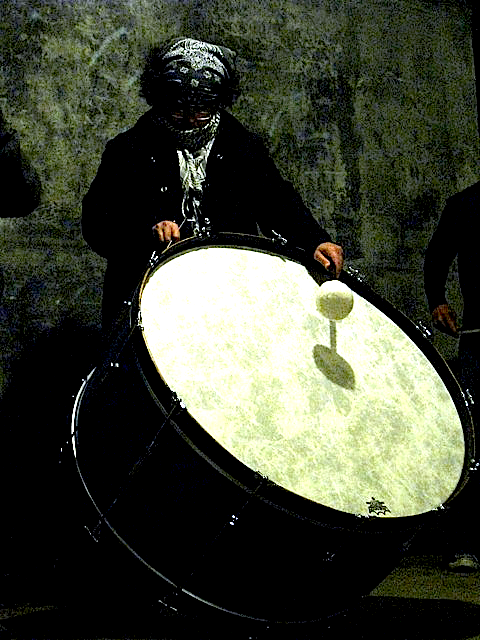 Suki O’Kane is a classically trained mallet percussionist, a composer and an instigator working with artists from a wide array of of music, movement & public art genres. One of the founding members of the lo-fi sampling ensemble The Noodles (w Michael Zelner), Suki plays percussion with Moe! Staiano’s Moe!kestra!, Dan Plonsey’s Daniel Popsicle, Big City Orchestra and is an ensemble member of Thingamajigs, performing new works by Edward Schocker, Dylan Bolles and Zachary James Watkins. 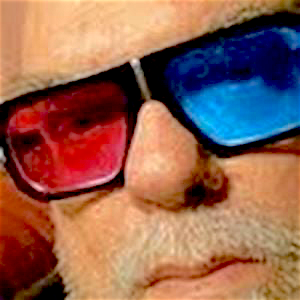 Tim has been working in the medium of live electronic and computer sound for many years, performing, exhibiting installation works and recording in North America, Europe and Japan. His work has largely been concerned with exploring the emergence of life-like properties in complex systems of interaction.

Groups he’s contributed to include the League of Automatic Music Composers and The Hub — pioneering live computer network bands — Rotodoti, the Natto Quartet, Fuzzybunny, All Tomorrow’s Zombies and Wobbly/Perkis/Antimatter. He has been composer-in-residence at Mills College, artist-in-residence at Xerox PARC, and designed musical tools and toys at Paul Allen’s legendary think tank, Interval Research.

Band leader & composer/improvisor Mika Pontecorvo’s work is informed by his computer science research and technical/generative design consulting, using emergent structures of improvisation based on live interaction architectures & systems he constructs in Max/MSP and other hardware/software elements.

His early work with prepared guitar, unorthodox playing techniques, synthesizers, and tape led to studies under electronic music pioneer Vladimir Ussachevsky (Владимир Усачевский), working with classical electronic music techniques of composition and performance as well as algorithmic composition. His current work draws on his research in evolution and intelligent simulations, developing compositions & compositional systems in the framework of architectural systems, relying of the paradigms in Complex Adaptive Systems (CAS) theory, the practices of evolutionary creative computing, and artificial life. 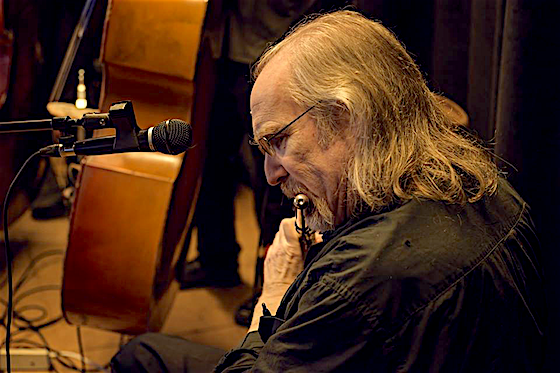 Notorious as the organizer of series and festivals like the Next Now Series and All Tomorrow’s Afterparties, Mika can often be found playing with his ensembles Cartoon Justice and Feral Luggage. 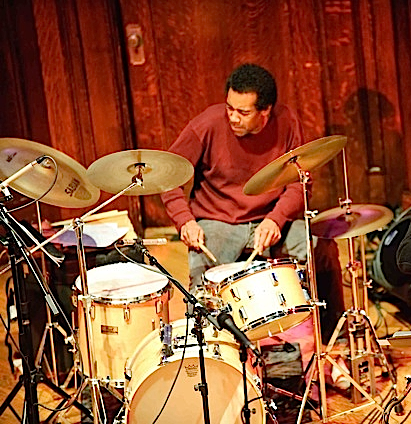 Donald has long worked with bassist Lisle Ellis, especially in the band What We Live w Larry Ochs, sometimes with special guests like Dave Douglas, Wadada Leo Smith or Kazakh vocalist Saadet Türköz (Саадет Туркёз). His longest musical association was with the late Glenn Spearman; they appear on close to a dozen CDs together in sextets, quintets, & quartets, w several tours to Europe. After coming up in the hothouse of the Paris free jazz scene, Donald’s been a stalwart of both the SF Bay Area & European avant-garde/jazz scenes, frequently touring there with Biggi Vinkeloe & Larry Ochs.

It’s been my honor and pleasure to collaborate with Donald on various electroacoustic projects such as the Biggi Vinkeloe Roughtet, IBIM LAB, and the occasional quartet of Bruce Ackley – Lisle Ellis – Joe Lasqo – Donald Robinson, as well as in duo format. 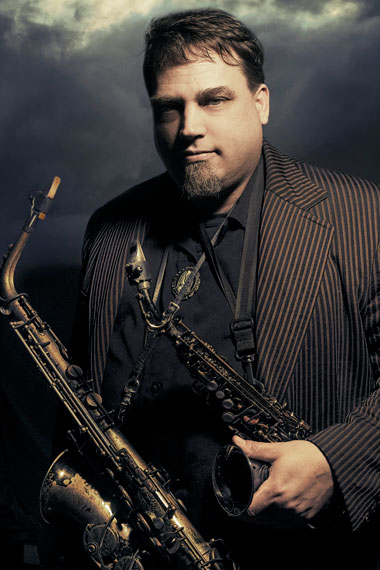 Rent Romus, saxophonist/multi-instrumentalist, bandleader, and producer, goes beyond standard forms of composition and improvisation and focuses on presenting and supporting the local experimental and avant-garde community. Rent has recorded and released 25+ recordings as a leader of groups and duos such as Lords of Outland, The Abstractions, Life’s Blood, Bloom Project (w Thollem McDonas), Jazz On The Line, Guinea Pig, and the PKD [Philip K. Dick] Vortex Project, as well as collaborating with innumerable avant & free jazz players.

As a producer and artist business activist he runs Edgetone Records a label for all forms of improvisation and experimentation. Rent is also the founder and Executive Director of Outsound Presents under which he curates the SIMM Series, the Luggage Store Series every Thursday, both in San Francisco, and The Outsound New Music Summit, a national experimental music festival held in the San Francisco Bay Area every summer in July. 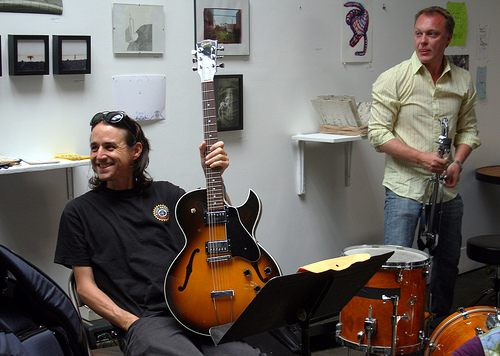 John Shiurba is a composer and guitarist whose musical pursuits include improvisation, art-rock, modern composition and noise. John has recorded and toured the U.S. and Europe as a member of the bands Eskimo, The Molecules and Spezza Rotto, as a member of the Merce Cunningham Dance Company and the sfSound ensemble, his own Triplicate and 5×5 ensembles, for the sfSound Ensemble, and with collaborators including Anthony Braxton, Eugene Chadbourne and Jack Wright, as well as many of the great improvisers of the Bay Area scene.

As a guitarist John has developed a unique and personalized approach to the guitar. Through the use of extended techniques and unusual preparations, he expands the traditional sound range of the instrument, producing stunning, often unrecognizable results. 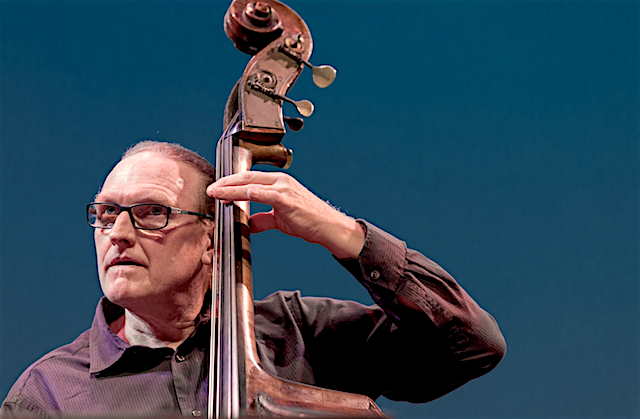 Scott Walton is a bassist and pianist whose music negotiates the terrain between jazz, free improvisation, and classical avant-garde. He has performed throughout North America and Europe in a host of collaborative contexts, and has recorded with Vinny Golia, Nels Cline, Myra Melford, and Bobby Bradford. Current projects include duos with Steve Adams, Tim Perkis, and Gilbert Isbin, the Michael Vlatkovich Quartet, the Bill Horvitz Sextet, and Alex Cline’s Flower Garland Orchestra.

Every time I play with Scott, I am amazed all over again by the speed, ease, and precision with which he finds just the right unexpected notes at the right time, for always surprising, cleanly articulated, virtuoso lines with intriguing gaps, which he somehow makes look easy.

Experience the real-time organization of masses of radical, beautiful sound by one of the finest tools ever devised for this purpose, the LIO improv hand-signal language — come vibrate with us at San Francisco’s home for cutting-edge film and music, The Second Act.