I’m greatly honored to have had the opportunity to curate the Vibration Hackers night at this year’s Outsound New Music Summit, an evening which will highlight the deep-space explorations of some of todays most intrepid computer musicians.

We’re going to have everything:

— Controller craziness which may include Wii-driven sound sculpture, digitized conch shells, advanced daxophonics, and who knows?

You’ll find great info about the music that will be performed, the artists, the venue/address, & transit options at the official festival page (link), so here I’ll offer a few personal thoughts and supplementary images. 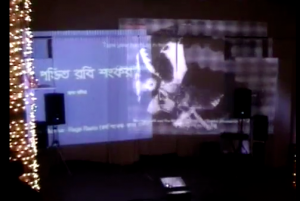 I was awed in Dec at The Lab as their amazing Twitter-fed performance created an arena for indiscriminate group genius through the hyperfusion of electronic media. 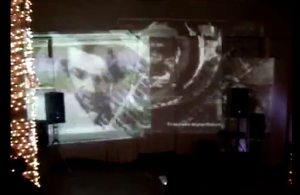 Setting up an open terminal to be fed hashtags by the audience, #MAX used these inputs from the audience’s spontaneous group mind to probe the web for related audio, text and video, which were subsequently transformed into sound and video art by its custom algorithms and carbon-units — much like the AI inhabiting the high-orbit cores of the Tessier-Ashpool mainframes in William Gibson’s Count Zero constructing Joseph Cornell boxes from the weightless flotsam surrounding it: 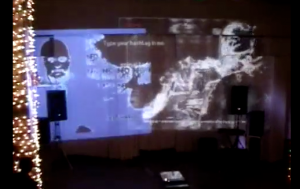 “Once, for a brilliant time, time without duration, I was everywhere as well . . . But the bright time broke. The mirror was flawed. Now I am only one . . . But I have my song, and you have heard it. I sing with these things that float around me…” 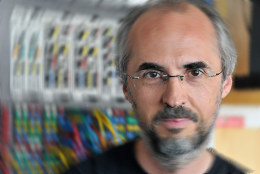 Fernando López-Lezcano of Stanford’s CCRMA presents Knock, knock… anybody there?, a short tour de force of sample-rate conversion effects and spatialization techniques that move the listener through a soundscape (or perhaps a soundscape through the listener…), to render visceral the experience of making border crossings between sanity and insanity.

I love to use processed vocal sounds in my own MSP work, so I was all the more intrigued with Fernando’s brilliant use of vocal and conversational samples to create a beautiful musical and emotional trajectory through a crowd of voices that may or may not be interior.

Recently rewritten in a 3rd order full 3D Ambisonics rendering, the piece will be diffused through a CCRMA 8-point sound system. 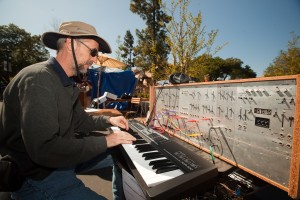 In addition to being a master of spatialization and the “Scotty” of the Starship CCRMA, Fernando is the proud father of El Dinosaurio, a homebrew analog synth from the Jurassic, newly resuscitated with an external MIDI-controller brain transplant. Don’t miss a chance to experience El Dinosaurio at the Touch The Gear Expo of the Outsound New Music Summit, 7-10pm, Sun 21 Jul (Outsound page: here. My blog post: here)

I had the pleasure to interview Fernando in CCRMA’s spherical Listening Room last week, and the resulting 48 min video interview is above).

One inspiration for what Ritwik Banerji (ঋত্বিক ব্যানার্জী) of Berkeley’s CNMAT & I are going to do sonically is this video from the Cornell AI lab showing two chatbots kitted out in machinima avatars going at it. I’m sure you’ll agree they have an interesting discussion:

Conversation is perhaps the most universal joint improvisatory activity, and what we hope to do with our musicbot routines is to pursue something similar to what these chatbots do on a linguistic level in the musical sphere.

I raided a cupboard of techniques ranging from blackboard architectures and, especially, computational grammars, from my old work in expert systems development and natural language processing, to create Maxxareddu.

Improv Grammar Diagram from "The WIsdom of the Impulse", by Tom Nunn

Ritwik brought his own insights into heuristics techniques, machine/human/extraterrestrial learning, and astromusicology to create Maxine.

Ritwik and I will join Maxine and Maxxareddu’s conversation from time to time with our acoustic instruments (sax and piano). 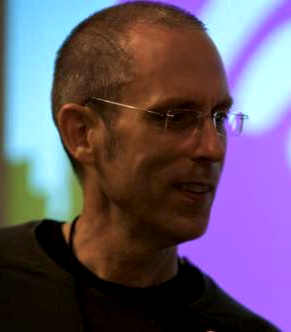 It will also be our honor and pleasure to welcome the inimitable visual synthesis of maestro Warren Stringer (of Muse).

Those who have seen Warren at one of my previous shows or a Bay Area technorave know his unique mastery in combining art and algorithm for the real-time visual accompaniment of improvisatory music. (And the rest of you have something great to look forward to.)

Based on the Russian Constructivist concept of Faktura (фактура) — making visible the qualities inherent in materials —   Ilya’s pieces use an exquisite sensitivity to bind “acousmatic” abstract sounds to processed sounds derived from real-world instruments and soundscapes, to play a subtle game of shifting contextualization and decontextualization.

At once understated and highly dramatic, these pieces all hinge on hidden climaxes of sound transformation from concrete to abstract and back again, for example, revealing an acoustic sound source in an abstract acousmatic field.

Using a brilliant array of techniques to create sonic layers and design not only the sounds, but the virtual spaces for the sounds in the listener’s mind, Ilya will take us through two revealing journeys through soundscapes derived from violin and percussion sounds and their various Klang-Doppelgänger.

After discussing with Ilya the many techniques he used (48 min video interview: above), I’m all the more impressed with how un-evident they are in the resulting pieces, which simply seem like open landscapes filled with beautiful and mysterious living sound entities.

Having heard the intense interplay of these musicians at various CCRMA concerts, especially at the astonishing outdoor Transitions concert last year, I’m very happy to close out the show with dimension-warping improv of the CCRMA Ensemble. 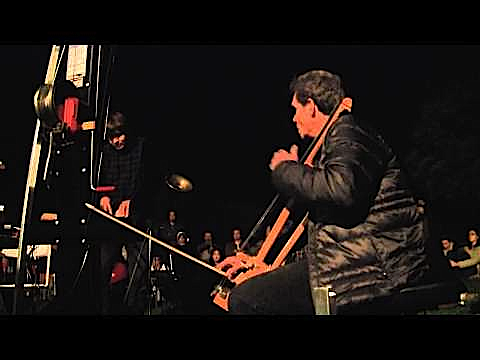 — extreme chops on physical instruments ranging from the celletto and guitar to the daxophone.

— ready, willing, and able to go anywhere in an improv 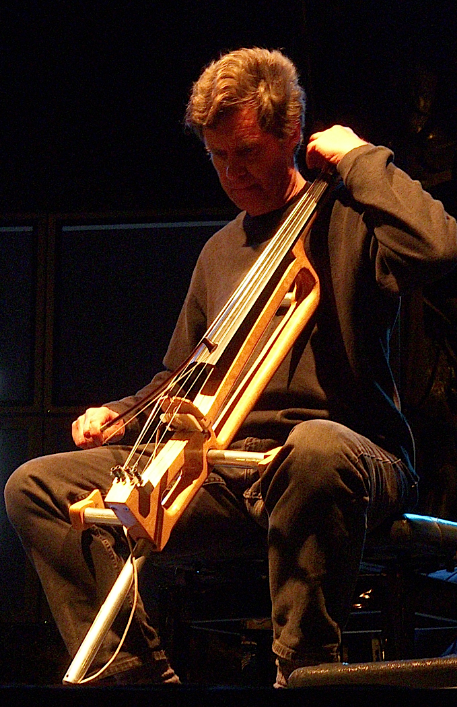 Chris Chafe at the celletto

Chris Chafe is a composer, improvisor and cellist, developing much of his music alongside computer-based research.

In moments off from sonifying tomatoes or smog, Chris is also Director of CCRMA.

Recent works include Tomato Quintet for the transLife:media Festival at the National Art Museum of China, Phasor for contrabass, and Sun Shot played by the horns of large ships in the port of St. Johns, Newfoundland. Chris premiered Rocco Di Pietro’s concerto, Finale, for electric cello and orchestra in 2012. 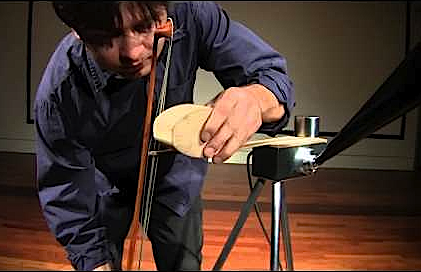 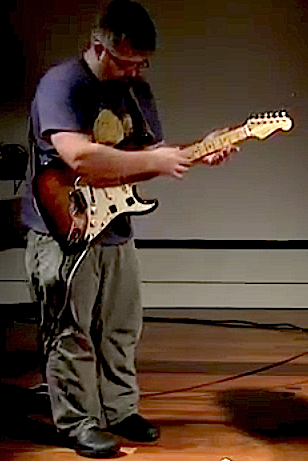 Last, but not least — as if all this weren’t enough — there will be an exciting MYSTERY GUEST. 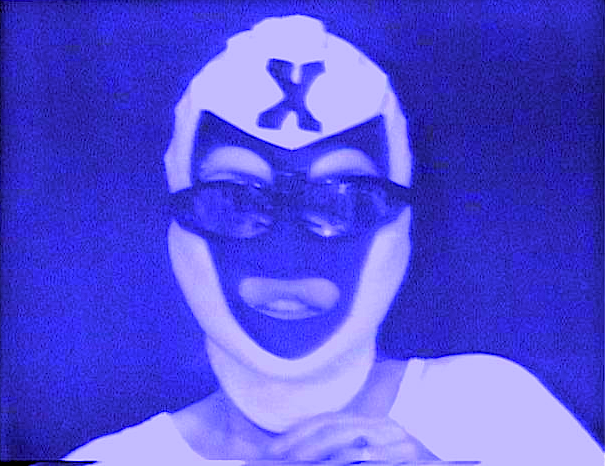 This will be a very, very memorable night of vibration hackery…

Look forward to see you there!