Posted on February 18, 2014 by Administrator

What could possibly go wrong…?

I’m keenly looking forward to joining Brno-based Czech composer/accordionist/dancer/sound artist Lucie Vítková and UK electronics enfant terrible Joe Snape, united with the incomparable footwork and soundwork of the Bay Area’s own Bob Marsh, for a unique evening of dragon-crocodiles and much more….

Our programme will certainly include free improvs, and may possibly also include two of my game pieces:

Drak nebo krokodýl? (Dragon or Crocodile?), a game inspired by the “Brno Dragon“, an elegant resident of the Brno Town Hall, who it is said took up residence there about 1000 years ago after being ousted from its lair along the River Svratka, where it had been tormenting and devouring the townspeople, before being killed by the clever chemical warfare strategies of a journey-man butcher.

An ambiguous phenomenon which can be looked at from two perspectives…

Whether to regard this fellow as a mythical dragon or mundane crocodile depends on framing and point of view, and so too in this game/piece players use ambiguous musical (motifs | events | patterns | phenomena) which can be perceived first one way, then another, appearing from one perspective as “dragon” and another as “crocodile”, or changing from foreground to background, to create a sonic hall of mirrors. 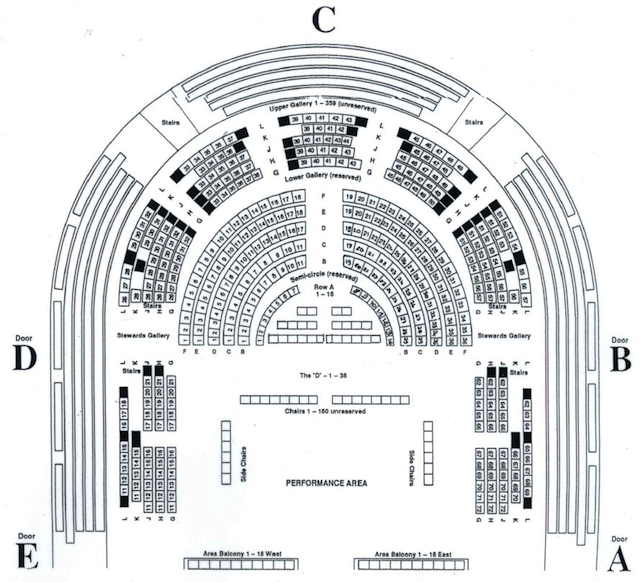 Another game piece of mine which we may do is Sheldonian パチンコ.

Here we sonify the floor plan of the Sheldonian Theatre in Oxford by turning it into a giant pachinko (パチンコ) machine of musical behaviors, letting fly balls of improv to rebound from blocks of planned behaviours. 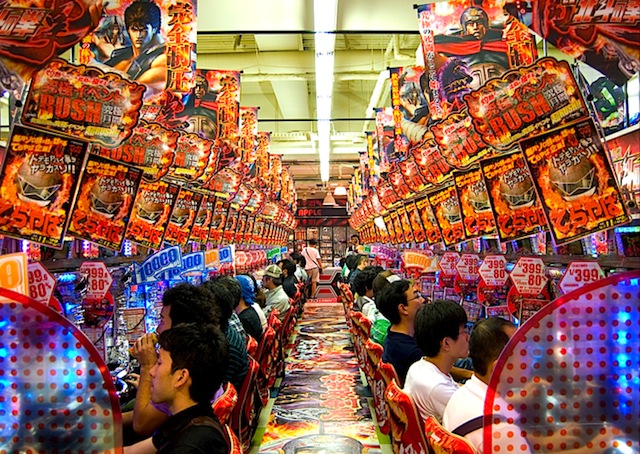 The machines, whether newer electronic simulations of physical balls, or old-school mechanical ones, give off a chaotic mixture of sounds as the game proceeds, and the total sound environment provides the summation of these sounds in an indescribable thrum.

What improvisation game could be more suited to the pounding flamenco rhythms of ecstatic tap-dancing futurist accordionists?

Our European colleagues prefer to have their music speak directly without pre-conceptions and as little mental baggage as possible, so they’ve asked me to eschew the usual bio/photo info and leave an open canvas for listeners going to the show.

However, they have consented to let some brief video samples appear to give you a quick taste of what may be on offer…

For example, one of the most mind-opening aspects of Lucie’s work for me is embodied in a series of pieces with collaborator Pavel Korbička under the rubric of Akustický obraz (Acoustic Paintings), which combine dance, sound production, and ritual, often employing large, or even room-size, invented / site-specific instruments, sometimes augmented by sound from an unseen source that provides a stark a-physical contrast with the completely physical means of sound production that Lucie is employing. These slay me.

See what I mean?

For a peek into the quantum box of Joe’s mind, check out him out at play in the following video:

Bob Marsh, the Ziggy Stardust of the Indeterminate

Also joining us (having previously left large swathes of stunned onlookers and listeners in the Midwest…) will be a treasure of our own Bay Area music scene. 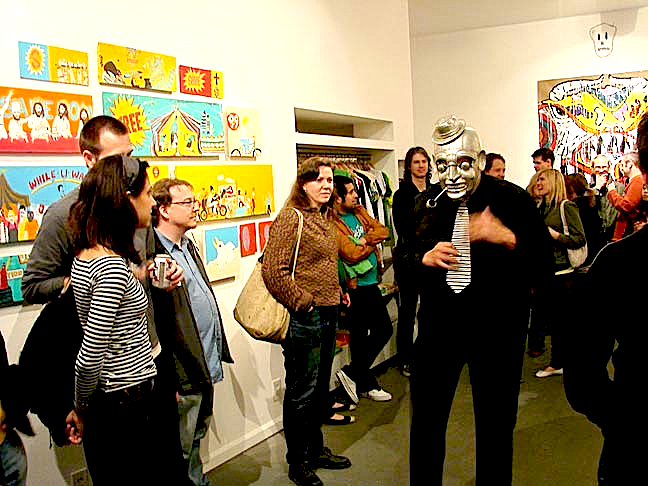 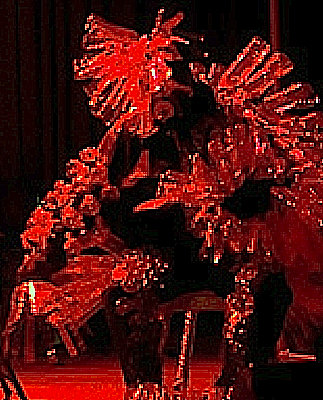 Originally from Detroit, Bob arrived in the Bay Area in 2000 after ten years in Chicago where he played with most of the avant improvisers in that rich and varied scene. Since his arrival on the west coast, Bob has been busy with several projects. He currently leads or directs Emergency (X)tet, a string ensemble focusing on textures and microtonics; the Che Guevarra Memorial Marching (and Stationary) Accordion Band, structured and free improv for six to fifteen accordions; Robot Martians, electronics and processed voice; the Out of the Blue Chamber Ensemble, a mixture of reeds and strings; Opera Viva, voiced physical theater; the Quintessentials, a quintet specializing in interpreting graphic compositions based on alterations to the Michelin Road Guide to France; the Free Reed Vibrating Society (inexplicable/self-explanatory), and the Illuminated Orchestra, structured improvs for large ensemble. Additionally Bob is a member of Rent Romus‘/Ernesto Diaz-Infante’s Abstractions, Moe! Staiano’s Moe!chestra and Tom Bickley’s Cornelius Cardew Choir. Bob tours frequently with his long term collaborator, saxophonist Jack Wright, and has recently been presenting a solo work involving violin, voice and tap shoes. Bob’s educational background includes a BFA in sculpture and an MA in humanistic clinical psychology. He has studied classical piano, classical guitar and vibraphone and has taught himself various other instruments. He currently is active with cello, accordion, violin, voice, vibraphone and electronics. 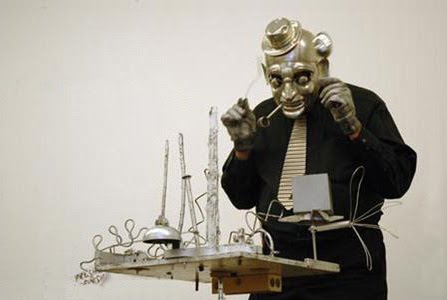 It is my honor and pleasure to play with Bob frequently in Aaron Bennett’s Electro-Magnetic Trans-Personal Orchestra and Jim Ryan’s Green Alembic. 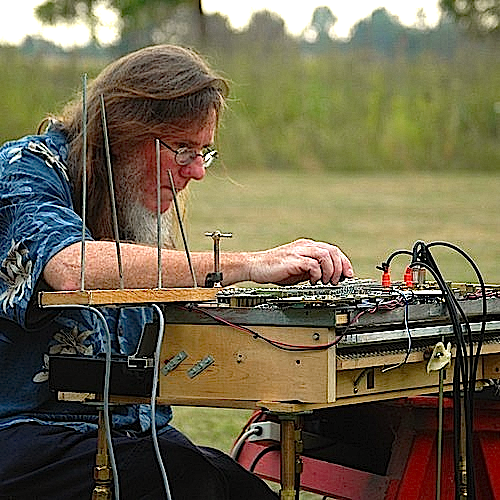 Eric Glick RIeman in the wild

Preceding us in Set 1, 8pm will be the incomparable Dr. Frankenstein of the recombinant mutated Fender Rhodes piano, Eric Glick Rieman.

Those who have been fortunate enough to experience SF Bay Area composer/improviser Eric Glick Rieman perform understand what it is to be taken somewhere they never imagined on a very unusual vehicle. At once gentle and radically experimental, Eric’s music has not only led to advances in instrument-surgery, but also many new playing techniques, as those who have seen his hands fly above the exposed tines of his sawed-off Rhodes can attest.

Here, have a look at Eric in action, performing What I Did Not Notice:

Performing on a variety of instruments, including the prepared/extended Rhodes electric piano, as well as (normal) piano, melodica, celeste, organ, Waterphone, and toy piano, Eric performs improvised and previously structured music in several settings, both solo and in groups, He has performed with the Mills College Contemporary Performance Ensemble in Oakland, CA, USA since 1999, and received an MFA from Mills in Electronic Music and the Recording Media in 2001. Eric writes for piano, Rhodes electric piano, and ensembles. 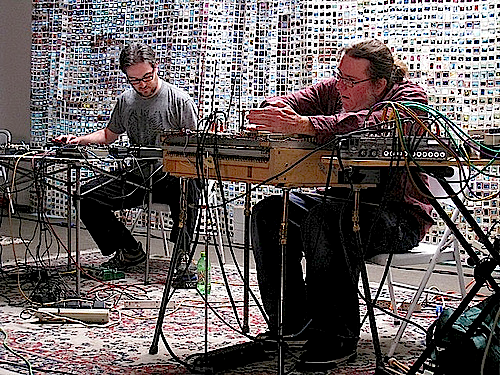 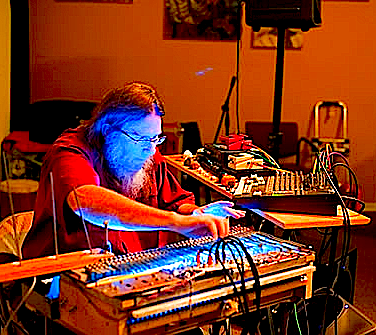 He’s received a Subito grant from the San Francisco Chapter of the American Composer’s Forum to present the piece Presentism2 (for small ensemble) at the 8th annual Music for People and Thingamajigs Festival in Oakland, CA and a Meet the Composer grant to perform his piece, Agape for prepared Rhodes, tape, and percussion at the Meridian Gallery in San Francisco. Eric’s work has been performed by the Mills Contemporary Performance Ensemble and the Cardew Choir among others. In January of 2011 he received a Meet the Composer grant to perform his compositions at the Pianoforte Foundation and the Experimental Sound Studio in Chicago, and he was recently commissioned by Anne Bluethenthal and Dancers (San Francisco). 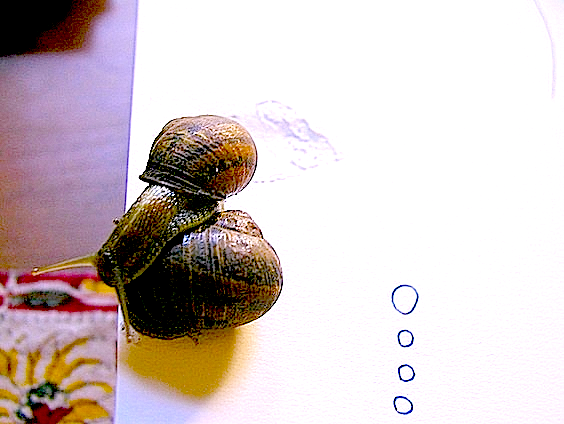 One of the most fascinating things about Eric’s work for me is his biosonic involvement with animals. Take for example his account of his collaborations with snails:

“The three snails I’m working with, dubbed Arugula, Epazote, and Nasturtiums, were rescued from my mother’s house. My mother grows roses in her garden, and has a constant battle with snails, who eat her plants. So, as many gardeners do, she poisons snails. When I initially took the snails from her garden, they seemed sick, and it took a while before they seemed better.

I have collaborated with these snails by inviting them to explore paper, and then placing charcoal onto their mucus trails and the bite marks they make as they taste the paper. Some of the paper they’ve crawled on and eaten has already had graphic scores drawn on it.

They react differently to different weights of paper, and especially like to eat heavy grade paper. Four of the pages we’ve made together were used in my piece, Snail Road House, where the performers interpret these markings using a system of cues, and also interact in other improvisational structures.

I made a conscious decision not to bring the snails themselves into the performances. I don’t think this would be something they would enjoy.

So, what does it mean to collaborate? It certainly implies a degree of mutuality. I am truly trying to collaborate with these beings in a way that preserves a spirit of mutual exploration. I’m interested in having a true collaboration with another species.” 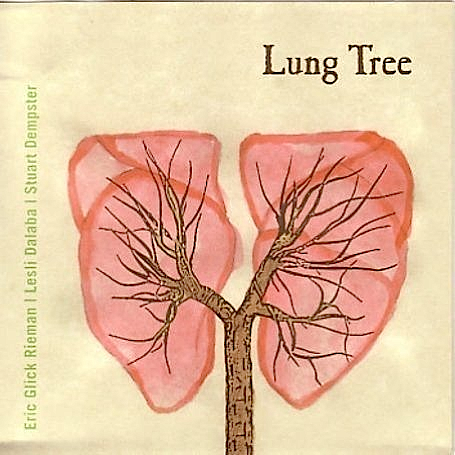 I’d be hard-pressed to name favorites among Eric’s many beautiful albums, but one I would particularly recommend among the collaborations is Lung Tree, with Lesli Dalaba and Stuart Dempster. 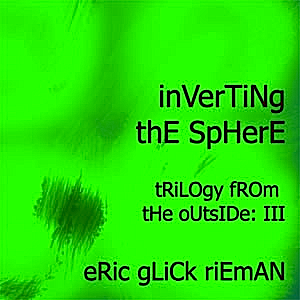 Trilogy from the Outside, by Eric Glick Rieman

Not to be missed among his solo works is the epic Trilogy From The Outside, a lover’s tour of the sonic possibilities of a highly mutated instrument.