I have the honor and pleasure to curate several shows in Aug at the East Bay’s indispensable focal point for new music, Berkeley Arts Festival (2133 University Avenue, Berkeley, CA – map), and this is the first at 8pm, Sun 10 Aug.

We start this series with a show running the gamut from the birth of mechanical analog synthesis in the crucible of Italian Futurism almost 100 years ago to the cutting edge digital synthesis of tomorrow being invented at Stanford’s CCRMA computer music research center. 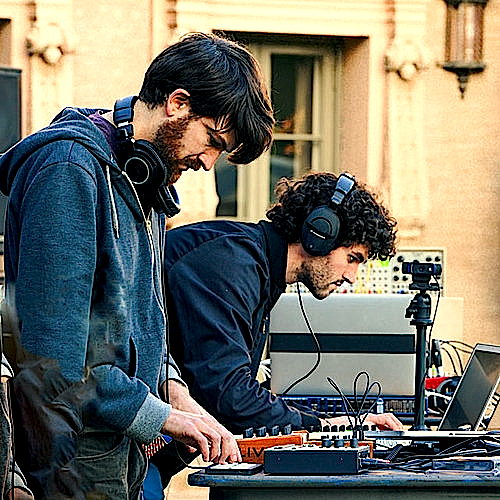 Their music is “a time-dilated dive into fractal cosmic jello.”

Mountains in Space is Luke Dahl and Colin Sullivan who met at Stanford’s CCRMA computer music lab and began collaborating musically in 2013. 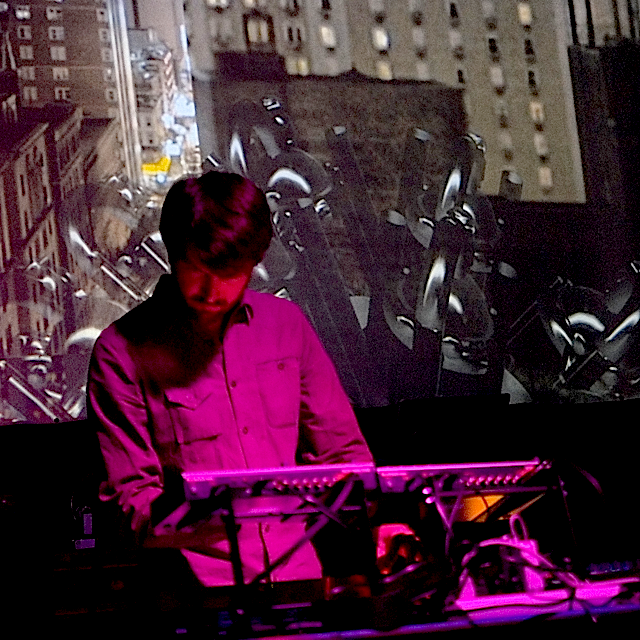 Luke Dahl started out a pianist & french horn player. After receiving an initial BS in Electrical Engineering from the U. of Michigan he worked on audio technologies at Creative Labs where he helped develop spatialization and reverb techniques for the SoundBlasterLive, and at Apple where he worked on audio for iPod products. Returning to academia full-time he received a Master’s in Music, Science, & Tech in 2007 at CCRMA, where he now pursues a Ph.D.

Luke’s research interests include a number of intersections between music and tech:

— The design and study of new instruments for musical expression & new performance ensembles based on these instruments. In this context Luke has created instruments and composed works for both the Stanford Laptop Orchestra (SLOrk) and the Stanford Mobile Phone Orchestra (Mopho), of which he’s a founding member.

— The relationship between music and movement, including instrumental performance gesture with traditional & new instruments, movement imagery and metaphors in descriptions of musical experiences, & sonification of movement data.

TweetDreams, created by Luke in collaborate with Jorge Herrera and Carr Wilkerson (also of CCRMA), is a multimedia musical performance made from live Twitter data. During a performance tweets containing specific terms are retrieved from Twitter’s servers, sonified into short melodies, and displayed graphically. The piece is created by three groups of users: the audience, the performers, and the world.

Luke is a holder of several patents, esp. in the field of Reverb Science. 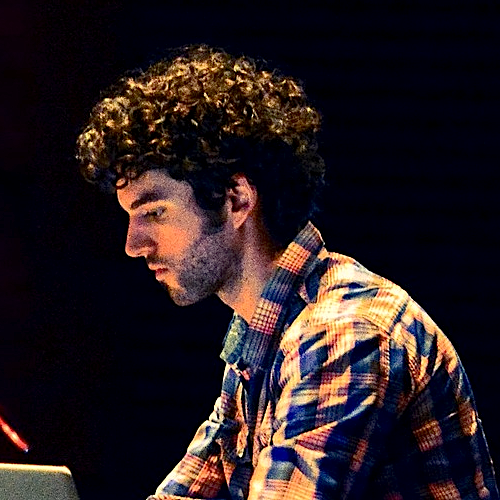 Starting out as bass guitarist, Colin Sullivan is a veteran of media companies such as Synthetic Cinema International (makers of Assault Of The Sasquatch, Alien Opponent, and Werewolf: The Devil’s Hound), and Gracenote; more recently, Colin is a co-founder of Oakland music tech startup Musikara, which makes tools for the interactive and collaborative creation and visualization of music.

At CCRMA, Colin is focused on exploring algorithmic music generation and sound synthesis.

There he’s developed some notable pieces of technology, for example:

— KnacK, a music composition framework for the ChucK programming language

— Tulpasynth, a collaborative music system that enables a group of people to spontaneously create together by manipulating a physics-based environment on a touchscreen interface

— Piedigrotta (1913): “Considered to be the pinnacle of Futurist sound poetry, Francesco Cangiullo’s epic poem about the yearly Neapolitan street party dedicated to the Madonna di Piedigrotta. The explosions of firecrackers, the cries of street venders, the tenori battling at the annual song competition and, more in general, the sound of an entire city presented as a living organism, all reach a sudden jolt when the procession of the Black Madonna takes over the stage. By brilliantly hijacking onomatopoeic techniques typically found in Futurist poetry to mimic the explosions of mortars and shrapnels, and by forcing them to recreate the complexly articulated noise of a wild street party, Cangiullo truly succeeds here in celebrating — and synthesizing — life.” (text by Luciano Chessa)

— Analfabeta (“Illiterate”, 1989/2013), by Luciano Chessa: “Capo Caccia is a promontory punctuated by dramatic limestone cliffs.  Under it, only a few miles from my hometown Sassari, caves run for miles by the Mediterranean coastline. As I utter the words “Capo Caccia,” something specific resonates in the cavity. The exploration begins. With the marine sonar of the mind I locate a place at the heart of the deepest cave, and thus I name it: because it is a primordial, pre-cultural, pre-linguistic place. A retired Aleph-like situation where language is just as unnecessary as it is irrelevant. There, in my childish mind, I picture everything being unchanged since the Creation. Illiterate” 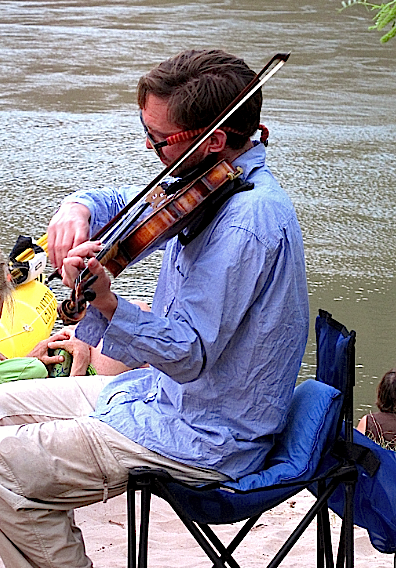 Ben Kreith plays by the water, as the ancient masters of the Chinese gǔqín (古琴) zither did to sharpen their ears

Violinist Benjamin Kreith has performed as a chamber musician, soloist and orchestra player throughout the US and Europe. He’s premiered solo works at the Strasbourg and Marseille festivals and performed as a guest artist with the Ying and Muir Quartets.

Ben helped to found the Ensemble CGAC in Santiago de Compostela, and has also performed with sfSound, Barcelona 216, and the Harvard Group for New Music. Recently he spent several years in Montana as a member of the Cascade Quartet and concertmaster of the Great Falls Symphony. He has taught at the Escola de Música de Barcelona and served as artist-in-residence at the University of California, Davis.

Ben has worked directly with composers including Francisco Guerrero Marín, Gunther Schuller, and Magnus Lindberg. His live recording of Christian Lauba’s Kwintus for violin solo is available on the Accord/Universal CD Morphing.

Ben also plays the harmonica and first achieved notoriety when his improvisations on that instrument with Leonard Bernstein were broadcast on international television.

As a composer, conductor, and soloist on instruments as varied as piano, musical saw, Vietnamese đàn bầu, & megaphone distortion/feedback, Luciano Chessa has been active in Europe, the US, Australia, and South America. 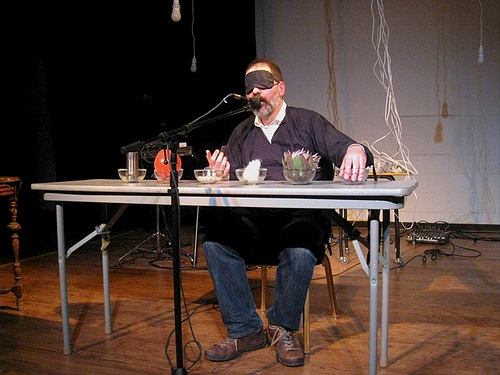 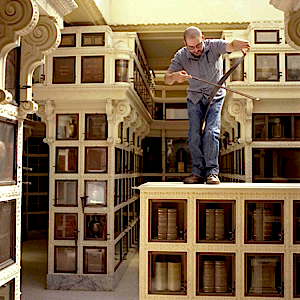 Luciano Chessa performs on the musical saw at the Garden of Memory, Chapel of the Chimes

… A Heavenly Act, an opera commissioned by SFMOMA for Nicole Paiement and Opera Parallèle, with a libretto by Gertrude Stein and video by Kalup Linzy; LIGHTEST, an SFMOMA commission presented last year at the SF Columbarium; and Set and Setting, for San Francisco Contemporary Music Players, premiered in Feb at the Yerba Buena Center for the Arts.

Luciano has been performing Futurist sound poetry for well over 10 years, based on a Dada typography which the futurists called parole in libertà, (“words in freedom”), including his reading of Italian Futurist sound poetry to accompany a performance of the Grammy Award Nominated New Century Chamber Orchestra, and he’s given the modern premiere of Francesco Cangiullo’s explosive Futurist sound poems Piedigrotta and Serata in onore di Yvonne to critical acclaim. 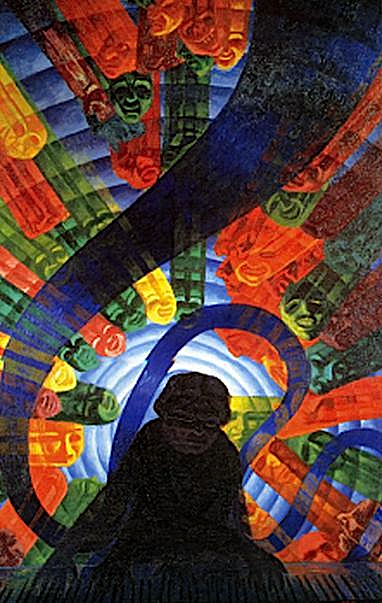 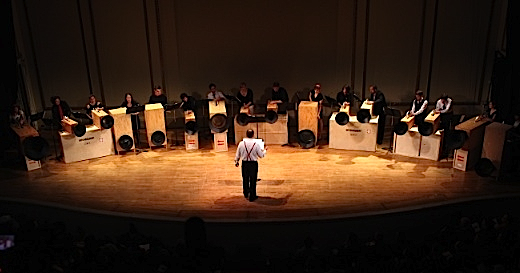 Luciano’s Futurist expertise resulted in a commission by New York City’s Biennial PERFORMA to direct the first reconstruction of Luigi Russolo’s intonarumori orchestra by master instrument builder Keith Cary, and to curate and conduct concerts which received a “Best of 2009″ mention in the New York Times, featuring, among many other compostions, his L’acoustique ivresse, for bassvoice & intonarumori ensemble, and the modern premiere of Russolo’s Risveglio di una città. 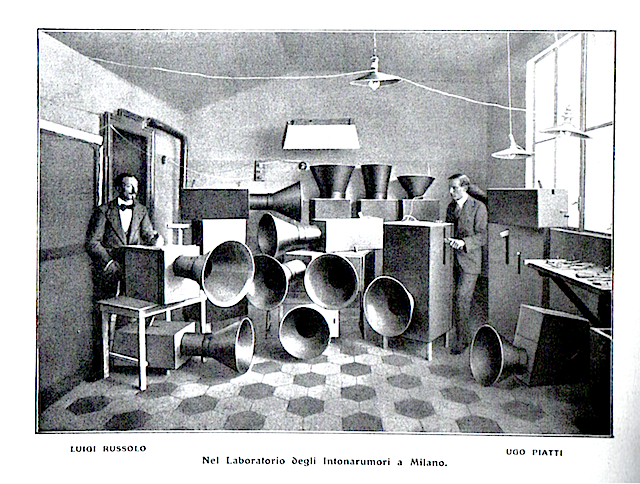 As can be seen in this photo, these intonarumori were astonishing early 20th-century synthesizer instruments which were not merely analog, but mechanical (we are talking about crank-driven here, look at Ugo Piatti to the right…). 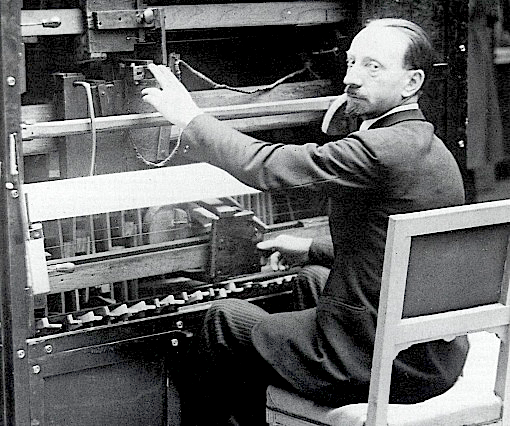 Luciano’s intonarumori orchestra went on to gather new commissions and play at the MART in Rovereto, Italy, as part of the Festival Transart, following with a sold-out intonarumori concert for Berliner Festspiele-MaerzMusik Festival; for Art Basel Miami Beach, he conducted this ensemble with the New World Symphony with Lee Ranaldo in the premiere of Ranaldo’s It All Begins Now! and continued to the Teatro Colón in Buenos Aires.

Luciano Chessa conducting Joan La Barbara and the Magik*Magik Orchestra in the premiere of La Barbara’s “Striation” as part of Music for 16 Futurist Noise Intoners, Performa, 2009 (Photo by Paula Court, courtesy of Performa)

Luciano brought the ensemble back to the Bay Area last year in an inspired concert at BAM/PFA, and a double LP dedicated to the Orchestra of Futurist Noise Intoners and documenting the first phase of this project appeared on the label Sub Rosa and promptly sold out.

A video with interviews of Luciano and showing the intonarumori in action can be seen below:

Luciano teaches at the San Francisco Conservatory of Music, serves in the Advisory Board of TACET, the international research publication dedicated to Experimental Music of the Université Paris 1 Panthéon-Sorbonne, and collaborates with San Francisco’s Istituto Italiano di Cultura. His music is published by RAI TRADE, the Italian National Broadcast Channels’ music publishing company and Edizioni Carrara.

Join us for a rare electro-acoustic evening, encompassing more than a century of enfants terribles blasting apart musical barriers….