I’m looking forward to join one of the Bay Area’s most exciting pianists and electronic musicians, Headboggle (Derek Gedalecia) for mano a mano, 2-piano, 2-electronics-table action in a series of Space Ghost Études.

And I’m very excited to present in the same show the wonderful music of Romanian pianist Lucian Ban & violist Mat Maneri, who are on tour from their home base in NYC to perform material from their hit ECM album Transylvanian Concert (plus new material) — a special opportunity to hear this unforgettable music live on the West Coast. 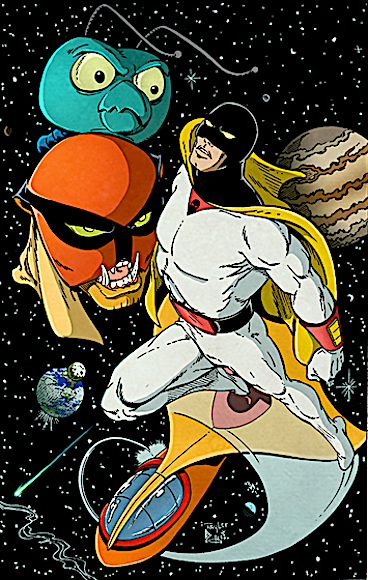 Enigmatic, ectoplasmic, culturally recycled into an ironic Cartoon Network drift-meme, and, by definition, beyond-stratospherically high, Space Ghost serves as an apt metaphor for the series of studies in synchronous & asynchronous de-coherent interstellar entanglement which Headboggle (Derek Gedalecia) & I will present.

Comprising a series of solo and duo interventions on the ether, we’ll wind up with an extended 2-piano | 2-electronics++ monster truck space voyage,  inspired by musical techniques analogous to the radical deconstruction of language in Michael McClure’s Ghost Tantras.

In honor of Space Ghost, a wide variety of sound signals derived from various planetary and astronomical objects (up to and including the sound of the Big Bang itself…), will be also employed.

A solo piano + electronics piece from me will also explore a meta-rāga built on the rare South Indian rāga Mandāri (ராகம் மந்தாரி), expanded into a bi-tonal form, and with additional electronic & non-pitch-based elements.

Headboggle is preparing some secret piano + electronics surprises as well….

It is my great pleasure and honor to revisit and explore this special double-piano sonic texture, made possible by the availability of 2 pianos at Center for New Music, with the amazing Headboggle. There is a wonderful, inspiring crunchiness in the interplay of 2 improvising pianos, especially when enhanced with spicy lashings of analog and digital electronics, objects, and strange toys.

For a previous exploration of 2-piano mano a mano at Center for New Music, see the video above of myself, the great Thollem McDonas, & 176 piano-keys in the context of a double-trio concert at C4NM in 2014.

Headboggle will sort you out… 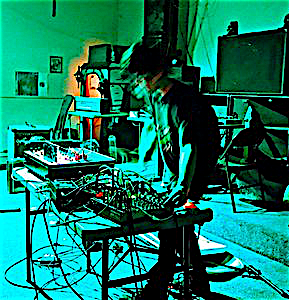 Derek Gedalecia, a.k.a. Headboggle, has been performing electronic + keyboard-based soundscapes for several years in the Bay Area in over a hundred local performances at venues ranging from GTK to YBCA. Incorporating lowbrow with highbrow art, music, and comedy, Head Boggle’s intent is to fuse together a new ecstatic improvisational performance style with a carefully crafted musical underbed layer. In his formative years, Derek studied classical and ragtime piano from noted ragtime composer/revivalist Dr. Brian Dykstra. 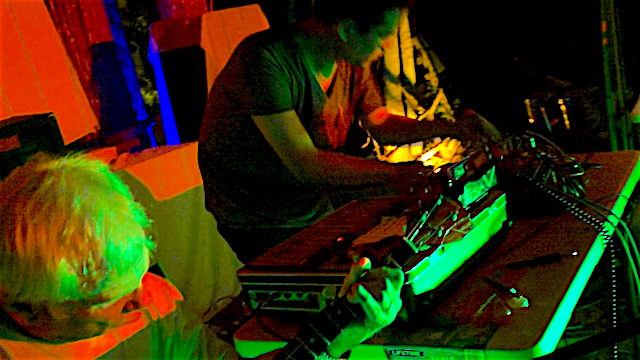 Those who have heard and seen Headboggle at the San Francisco Electronic Music Festival, The Second Act, The Lab, RobotSpeak, or any of his other favorite venues, know his unique multi-dimensional sound universe; I encourage the rest to quickly make acquaintance with his art and enjoy an absolutely fresh sonic experience.

Pianist / laptopist Joe Lasqo studied classical music in India; computer/electronic music at MIT, Columbia, Berkeley/CNMAT; has been a long-time performing modern & avant jazz musician; & has lived, played and listened in several Asian and European countries (now in San Francisco). He’s keen on the application of artificial intelligence techniques to improvisation and the meeting of traditional Asian musics with the 21st century, most recently in an AI + humans ensemble multimedia piece at Grace Cathedral for the Soundwave ((7)) Biennale.

His recent album, Turquoise Sessions, is available on Edgetone Records; with new releases planned in 2016. au quotidien, a new album with German-Swedish saxist/flautist Biggi Vinkeloe, master drummer Donald Robinson, and cello madman Teddy Rankin-Parker is in production for release in 2016. 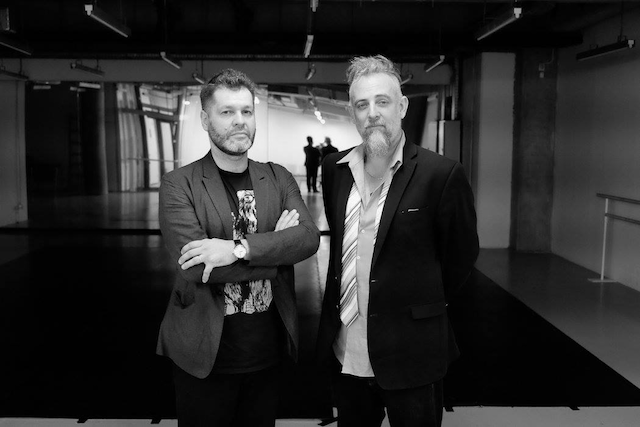 When pianist Lucian Ban and violist Mat Maneri joined up for a concert in an opera house in Târgu Mureș in the middle of Romania’s Transylvania region, the music was, as JazzTimes puts it, “as close as it gets to Goth jazz”.

Released in 2013 by ECM Records, the Transylvanian Concert album features a program of original ballads, blues, hymns and abstract improvisations, the whole informed by the twin traditions of jazz and European chamber music. The album has won critical acclaim on both sides of the Atlantic, including several Best Album of 2013 awards, and has spawned continuous touring. 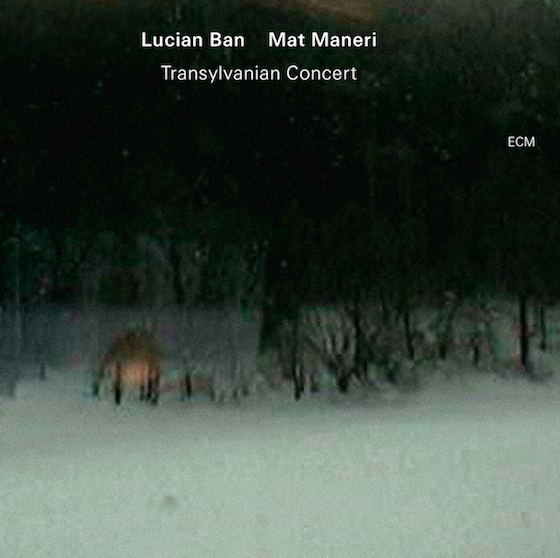 The Guardian (UK) noted  Transylvanian Concert’s “own kind of melancholy beauty and wayward exuberance”, The New York Times called it “a lovely and restive new album”, All About Jazz hailed its “moments of unanticipated beauty”,  L.A. Weekly talks about a performance that is “mesmerizing, evocative and sensually explicit” and The Village Voice said “it is one of those records that whisk you away”. Jazz Weekly talks about “A modern collection of sonatas that erase the lines between jazz and classical, a melding of sounds similar to a modern liturgy”. 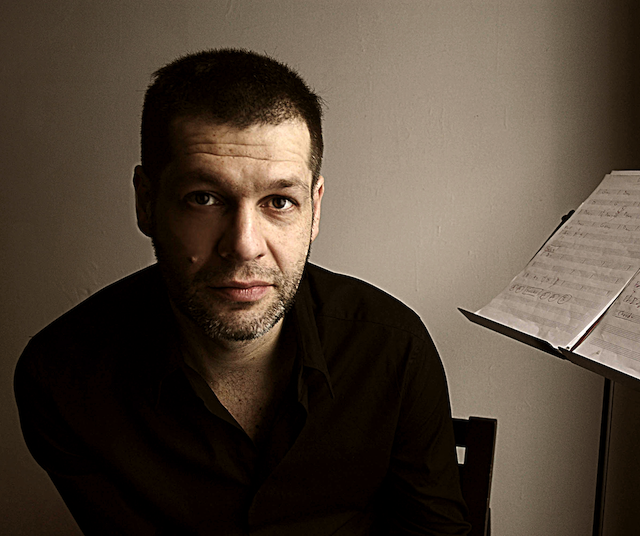 Lucian Ban (piano) was raised in a small village in northwest Transylvania, in the region where Bartok did his most extensive research and collecting of folk songs, and grew up listening to both traditional and classical music. He studied composition at the Bucharest Music Academy while simultaneously leading his own jazz groups, and notes that his approach to improvisation has been influenced by “the profound musical contributions of Romanian modern classical composers like Aurel Stroe, Anatol Vieru and of course Enescu”. Desire to get closer to the source of jazz brought him to the US, and since moving from Romania to New York in 1999 his ensembles have included many of New York’s finest players. 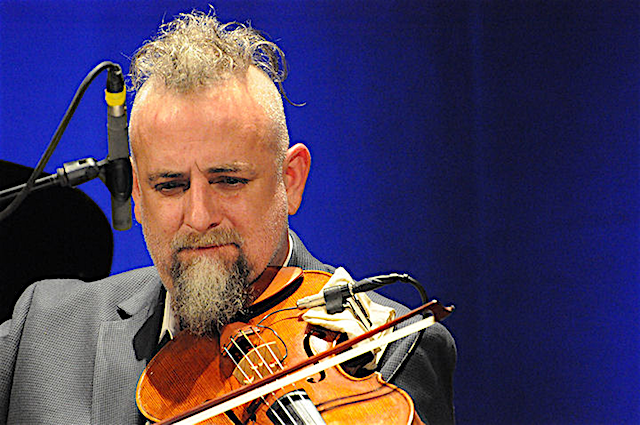 Mat Maneri (viola), 2006 Grammy Nominee for “Best Alternative Album”. Over the course of a twenty-five year career, Mat Maneri has defined the voice of the viola and violin in jazz and improvised music. Born in Brooklyn in 1969, Mat has established an international reputation as one of the most original and compelling artists of his generation, praised for his high degree of individualism, a distinctive marriage of jazz and microtonal music, and his work with 20th-C icons of improvised music.

From Transylvania to the depths of infinite space and beyond… Why wait? Come vibrate with us at Center for New Music on Thu 27 Oct!