Posted on September 9, 2011 by Administrator

This series in the Musicians Union Hall, 116 9th St @ Mission, SF, reminds me of cozy parties among friends at my favorite yakitori joint, nestled under the Shimbashi Bridge in Tokyo in the night rain… from the outside a few hints of warm light and laughter, on the inside a serious wild time. The difference is that, unlike the yakitori joint, the SIMM Series is a spaceship that travels to other musical dimensions.

An acoustic-centered sister of the Luggage Store Series, SIMM has brought the best cutting-edge acoustic jazz and avant-garde musicians in and out of the Bay Area to SF audiences and delivered one musical adventure after another. It’s my honor to return to this series.

My set (#2) for piano, percussion, and an undisclosed instrument, will include:

– A composition + improv in one of the warmest and most serene rāgas of North Indian music, राग आसावरी (Rāga Āsāvarī), from my new album “Turquoise Sessions“, which will be available at the show.

– A very unique interpretation of “So What” by trumpet master Miles Davis, deconstructed and reconstructed according to various linguistic theories.

– By request, an extended version of 피아노 산조 — 이생강류 (Piano Sanjo, after Yi Saenggang), with a new interlude refracting this traditional Korean improv form through the prisms of French piano music & jazz

– The first public performance of a new meta-rāga, राग म्यॉबिउस कुंडलित वक्रता बोधिचित्त (Rāga Möbius Helix Bodhicitta). An alāp to a larger piece, “Not Sudden. Not Gradual” in a meta-rāga whose serial scale steps trace a spiral in multiple dimensions of musical sound. Like an array of linear algebra variables, the meta-rāga’s scale steps may contain functions or procedures as well as values.

– Naturally there will be some surprises…

Set 1 will be Bob Marsh and Rent Romus

Rent Romus is a titan of wildly expressionist free jazz sax, leader of Lords of Outland, and a principal conspirator in the Luggage Store Series, SIMM, Outsound.org, and Edgetone Records.

Little is certain about the encounter between these two except that Bob will play the piano and the fabric of space-time will be altered due to the high sonic energies released.

Some quotes from Bob Marsh may/may not shed light into the quantum box:

“…The only thing I really liked was the Hannon Finger Exercises. It was a finger dance on the keys… Steve Reich realized that the piano was an interesting series of tuned drums. So the notes boil down to: My approach to playing the piano is that it is a percussive finger/hand/arm dance….

Basically, I am a “body player”…. A little theory is in my head… I am a modal player, akin to the raga approach. [However] my mode currently employs all 88 notes of the piano, all notes in between and all other sounds that are possible.”

Rent Romus is mathematically impossible to describe, but here’s an attempt:

“Romus’ sax rekindles that flame egregiously, thematic sketches becoming instant excuses for the instruments to coalesce into a gruelling mass of Pollockian sonic painting that plumps on the brain and self-adjusts until your synapses are completely disjointed.” Massimo Ricci, Touching Extremes

More on the show:

I don’t believe Bob Marsh will be in persona for this show, but don’t miss him another time when he is. For example, as in one of his Sonic Suits: 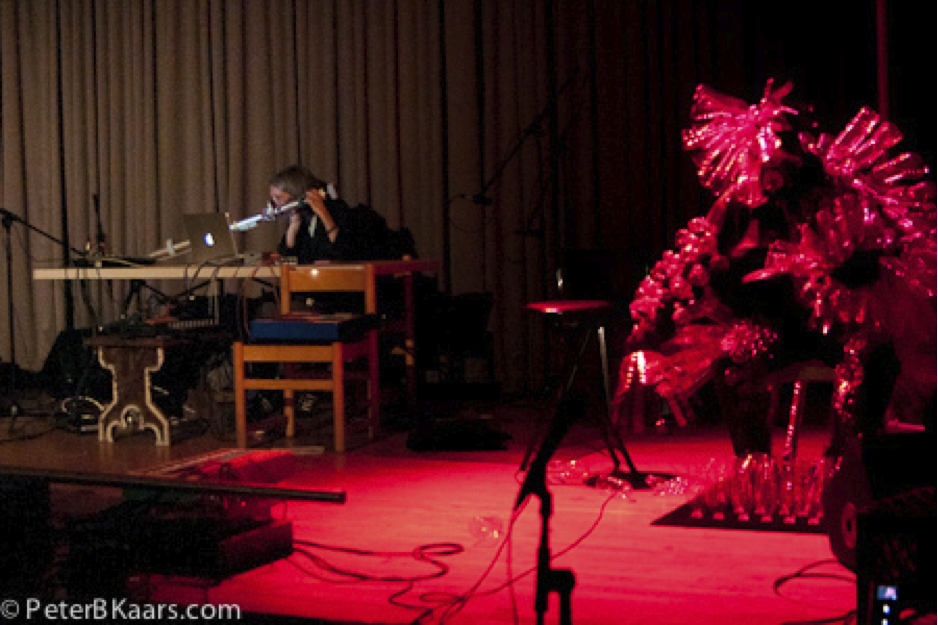 Hope to see you at this premiere of Rāga Möbius Helix Bodhicitta!